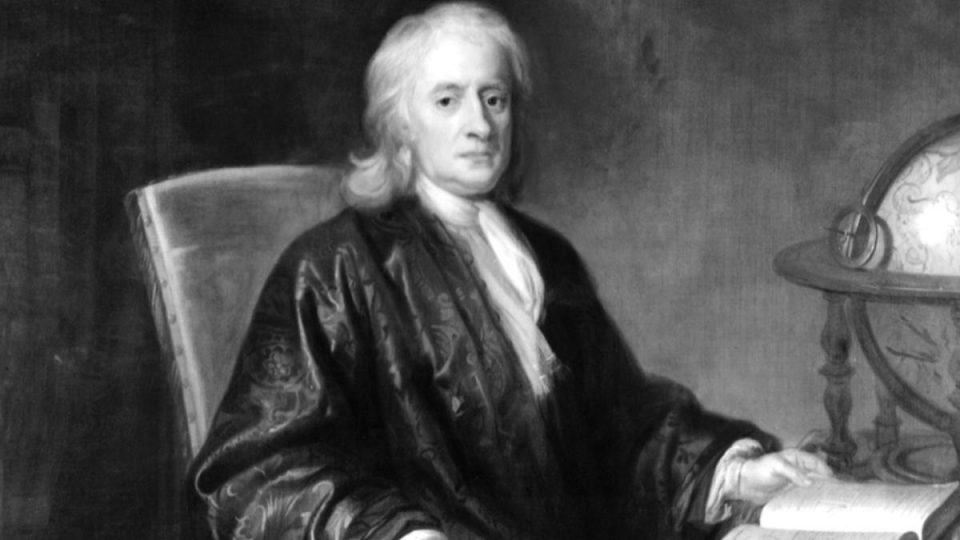 After we have studied different types of movements within the kinematics, we shall now deal with the cause of movements or changes in movement:

The cause for a change in movement (= acceleration) is always a force.

The property of all body without force to maintain their State of motion, called inertia.

The foundations of classical mechanics are based on the of Isaac Newton 1687 formulated laws of motion, which are also known as Newtonian axioms (an axiom is something like a basic statement).

A body remains in a State of rest or uniform rectilinear motion, as long as he is not forced to a change of the motion State by forces acting.

The experience of the everyday can lead to misconceptions

According to the law of inertia, a body in motion with undiminished speed should keep moving, as long no force acts on it, which slows him down. This seemingly contradicts our everyday experience, because to continue with constant speed, E.g. by car or bicycle, we must give gas or further contact. Not self-propelled, every body on the Earth eventually grinds to a halt.

However, the reason for this is not that No force acts, but rather, that almost always affects another, namely the frictional force. This provides most sure that every body will be slowed down.

So a body uniformly moves on, the friction force must be overcome, including ultimately a driving force is required.

There’s no friction or is negligible (examples: A car slides on an air cushion car or a spaceship floating in outer space), drive is required for the movement, however, No .

That there are everyday life virtually always friction, often leads to false beliefs about the relationship between force and motion, namely that there is no movement without force, and that the cause of a movement is a force.

The idea that a body had given with the body and consumed slowly over time is a force, already existed in the middle ages (→ impetus theory).

This idea is however wrong!

Forces can act only through interaction ‘s on a body. A body “has” no force, however, but depending on the State of motion only energy and momentum.

Every body is slow

That each body is seeking to maintain its state of motion, as you realize, if you try to push a car, to stop a heavy object or when you quickly pull a tablecloth off the table – the objects on the table are not moving with the Blanket with but stand still because they are lazy.

The inertia and therefore the force that is required to accelerate a body depends on its mass – the greater the mass of a body, the greater is its inertia.

The acceleration is constant, force and mass are proportional to each other:

The force is greater, which acts on a body, the greater is the acceleration of the body. At constant mass, force and acceleration are proportional to each other:

Together, a proportionality between the force and the product stems from mass and acceleration:

The proportionality factor is in this case “1” so that we can write:

. This is no coincidence, it is due to set the unit for the force:

The unit of force

The unit of force is called “Newton“. The definition is as follows:

1 Newton (N) is the force that is required in a second on the speed of 1 m / s to accelerate a body weight of 1 kg from the rest.

This is equivalent to the phrase:

The statement about the proportionality between the force and the product of mass and acceleration is known as second Newtonian axiom . (The power was originally defined however as a pulse change per time in the form of

The change of the motion (= acceleration) is proportional to the applied force and has the same direction as the force.

Note: The proportionality factor is the mass – at constant acceleration, force and mass are proportional to each other.

is known as the equation of mechanics , because it is the basis for many laws of motion in mechanics. You should therefore never forget them again!

From the basic equation of mechanics as well as the definition of force also the connection between the unit Newton and the base units is as follows:

The unit of 1Newton can be expressed in this way also with base units .

Both force and acceleration are vector quantities.

The vector notation of the equation of mechanics is as follows:

The force is with the basic equation of mechanics for all body of known mass charge, that is required for a certain acceleration:

As the acceleration can be calculated, which causes a certain force on a known mass:

The force required is greater or the acceleration, if the friction is not neglected can become smaller.

We use this acceleration in the equation of mechanics, we get:

We get the weight

of the body – because this is Yes the force that accelerates every body in free fall.

The weight of the body is

You know this formula already from middle school – there was however referred to the acceleration as a location factor .

On a body double mass works so the double weight. The acceleration remains constant.

In this context, the realization that all bodies fall equal quickly arises immediately!

Thus, the weight of the body is location-dependent, while the mass is orstunabhängig.

The weight force and thus the gravitational acceleration g, discovers a body depends on the mass of the celestial body.

Because the moon has a smaller mass than the Earth, the gravity and thus the gravity on the Moon is much smaller than on Earth. It is approximately

Info: The law of universal gravitation

Newton established a law in 1687, with the is the gravitational force between two bodies of the masses

, which is at a distance

are apart, can be calculated.

The law of gravity is as follows:

of the distance of the Massenmittelpunkte and

The gravitational constant has the value

It follows from the law of universal gravitation: one doubles the distance

of the two masses, thus reducing the force of attraction between the dimensions by a factor of 4.

Puts you in the law of universal gravitation for

the mass of the Earth

, so arises for a mass

a gravitational force of

, so the the weight of the mass

At an altitude of 6378km (above the Earth’s surface), a body undergoes only 1/4 of its force on the ground because the distance from the Earth’s Center is twice the size.

On Earth, the acceleration due to fluctuating gravity is not everywhere equal. Among other things due to the flattening of the Poland, the gravitational acceleration at the Poland is greater than at the equator.

Acceleration due to gravity at different places on the Earth:

affects every body on the Earth at any time.

That the weight except in free fall but does not cause that all bodies are equally accelerated is because that one or more additional forces.

Stands or a body on the floor or on a table, so there is another force, which is as great as the force of weight but is this face in opposite directions respectively. This force is applied from the bottom of the table etc. and causes that the sum of the body acting on the body is 0, so there is no change of the motion State.

This force can be described as the reaction force – the floor or table responds to the weight of the body with an equal opposite-oriented force. E.g. a table could not afford the corresponding reaction force, so this would collapse.

This connection is also known as third Newtonian axiom, principle of interaction or as a law of action and reaction .

Forces are always in pairs. The body A exerts a force on body B (actio), so body exerts an equal but opposite-oriented force on body A (reaction) B.

The interaction principle applies to all types of forces.

On the question of whether we are attracted by the Earth or the Earth from us, the answer is:

We put on the Earth with the same force with which we are attracted by the Earth. It’s an mutual attraction.

That we fall toward Earth and not vice-versa, is only to the much larger mass of the Earth and its inertia associated.

The same applies to magnetic attraction or repulsion forces. Just like a magnet attract a piece of iron, the piece attracts iron – and with the same force the magnet!

Should a body quickly accelerated (E.g. when driving in a car), correspondingly large forces will be generated.

When driving a car, the tires exert a force on the road. The corresponding reaction force of the road on the tire speeds up the car. This power can however not be greater than the friction force between the tire and road.

The same also applies to the brake.

It is because that these values sometimes even be surpassed in the Realfall, that in addition to the frictional force more effects can play a role, which can increase the reaction force.

Risk of injury from the accident

In accidents, vehicles are slowed down within a very short time from high speed to standstill. This is possible only by very large forces that impact both the vehicle and the occupants.

Driving a car against a fixed object, the braking distance is just as big as the car can be deformed. This area is called also “crumple zone”.

In an accident, it is not desirable, therefore, that the car is damaged as little as possible, because the forces would be even greater. Rather, it is attempting to deform a widest range, causing the accidents will be reduced to the occupant.

Calculation of forces acting on the occupants of a car in an accident:

Adopted a car drives with 40 km / h frontal against an obstacle. The crumple zone amounts to 80cm.

Follows from the laws of motion acceleration

where s the acceleration distance is, so here the crumple zone

As applies to the power

, is also the force acting on the inmates, the about the 8 their weight.

This can cause may already serious injuries – especially when you’re not wearing!

It is important to the realization that the force in an accident on the inmates applied acceleration and hence the square increases with the speed. At double speed (i.e. 80km / h) acceleration and force as big 4 times so be and corresponded to about 31 g!

This website uses cookies to improve your experience while you navigate through the website. Out of these, the cookies that are categorized as necessary are stored on your browser as they are essential for the working of basic functionalities of the website. We also use third-party cookies that help us analyze and understand how you use this website. These cookies will be stored in your browser only with your consent. You also have the option to opt-out of these cookies. But opting out of some of these cookies may affect your browsing experience.
Necessary Always Enabled

Any cookies that may not be particularly necessary for the website to function and is used specifically to collect user personal data via analytics, ads, other embedded contents are termed as non-necessary cookies. It is mandatory to procure user consent prior to running these cookies on your website.